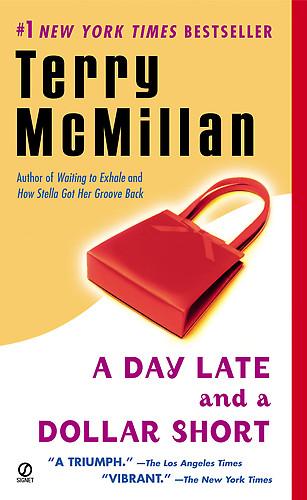 Amazon.com Review
Terry McMillan’s novels feature chatty, catty narrators who have a story they’re just busting to tell you. The dominant voice in A Day Late and a Dollar Short is Viola Price, whose asthma just sent her to the ICU. And who came to visit? The Jheri Curl-wearing Cecil, "a bad habit I’ve had for thirty-eight years, which would make him my husband." Viola doesn’t think Cecil’s such a catch: "His midlife crisis done lasted about 20 years now," and "to set the record straight, Cecil look like he about four months pregnant." But somebody did catch Cecil–he recently left Viola for "some welfare huzzy" with three kids. And, as we soon find out in Cecil’s first-person chapter, Viola has abundant flaws of her own. McMillan deftly sketches the exasperated intimacy of the long and unsuccessfully married.
She also has great dish about family dynamics. Have Cecil and Viola’s kids got problems! When lovable, luck-free Lewis turns up to visit his mom, he’s drunk, broke, and still whining about his ex, Donnetta, who "didn’t have as much sense as a Christmas turkey" (though she did have the sense to dump Lewis). Now Lewis consoles himself with his Bobbing Betty doll. "How could somebody with an IQ of 146 be so stupid?" marvels Viola. And that Charlotte! Viola’s daughter is "a bossy wench from the word go." (Gee, where could she have gotten that trait?) Charlotte feels like she never got her fair share of attention, having been born 10 months after the eldest daughter, Paris (now the driven mom of a brilliant athlete whose white girlfriend claims she’s pregnant). Charlotte took it out on younger Lewis and Janelle, who’s been in college 15 years with no degree in sight.
At first, you’ll make ample use of the family charts in the endpapers to figure out who’s who, but pretty soon you’ll feel right at home with the squabbling, multiply dysfunctional, ultimately loving Price clan. You may agree with Viola: "Some folks got some stuff that can top ours. Hell, look at the Kennedys." –Tim Appelo

From Publishers Weekly
her four adult kids, all of whom have their own children, and their various circumstances, relationships and dilemmas. Not about to give Viola the last word, the other family members take turns talking in each of the remaining chapters. At first it is a bit confusing trying to keep track of who’s who (the audio book doesn’t come with family charts, the hardcover does), but it all eventually becomes clear as this complex and entertaining story of family dynamics or as daughter Paris calls it, "As the World F*ing Turns, again and again and again" gets fleshed out. McMillan is in her element, and readers Coleman and Willis do an excellent job of capturing the personalities of all the characters, be they surly, sassy, depressed or comic. Their talents guide the listener expertly through this captivating and ultimately optimistic tale of the ties that bind and the things that really matter. Simultaneous release with the Viking hardcover (Forecasts, Dec. 11, 2000).
Copyright 2001 Cahners Business Information, Inc.