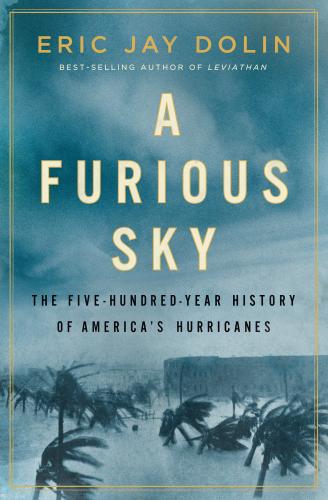 Description:
With A Furious Sky, best-selling author Eric Jay Dolin tells the history of America itself through its five-hundred-year battle with the fury of hurricanes.
Hurricanes menace North America from June through November every year, each as powerful as 10,000 nuclear bombs. These megastorms will likely become more intense as the planet continues to warm, yet we too often treat them as local disasters and TV spectacles, unaware of how far-ranging their impact can be. As best-selling historian Eric Jay Dolin contends, we must look to our nation’s past if we hope to comprehend the consequences of the hurricanes of the future.With A Furious Sky, Dolin has created a vivid, sprawling account of our encounters with hurricanes, from the nameless storms that threatened Columbus’s New World voyages to the destruction wrought in Puerto Rico by Hurricane Maria. Weaving a story of shipwrecks and devastated cities, of heroism and folly, Dolin introduces a rich cast of…