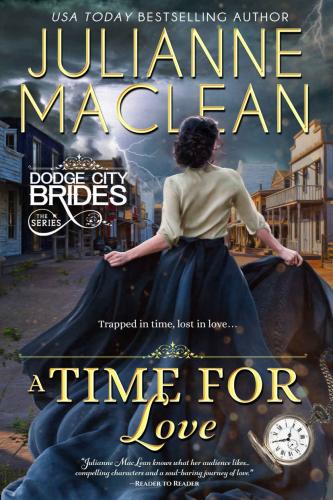 Description:
HERO AND PROTECTOR
Former bounty hunter, expert gunslinger, and the toughest sheriff Dodge City has ever known, Truman Wade is a real man from the tip of his black Stetson right down to his spurs and leather boots. He’s never met his match in a gunfight, but he’s never met a gorgeous, gutsy woman from the twenty-first century either.

TORN BETWEEN TWO WORLDS
Newly single after a rocky breakup with her self-absorbed fiancé, newspaper columnist Jessica Delaney crashes her car in a lightning storm and soon finds herself dodging bullets in the Wild West. Before the night is out, she’s tossed in jail for a murder she didn’t commit, and if things don’t seem complicated enough, the impossibly handsome sheriff in charge of her arrest has danger written all over him – and a sexy swagger to die for. Jessica knows she needs to get home, but when Sheriff Wade’s enticing touch sets her passions on fire, she begins to wonder if fate has other plans for her, and soon she must choose between the life she longs for in the future. and the greatest love she’s ever known.

NOTE: This novel was originally published under the title TAKEN BY THE COWBOY in 2013.

“You can always count on Julianne MacLean to deliver ravishing romance that will keep you turning the pages until the wee hours of the morning.” – Teresa Medeiros, bestselling author

“She is just and all around wonderful writer, and I look forward to reading everything she writes.” – Natasha Smith, Romance Junkies