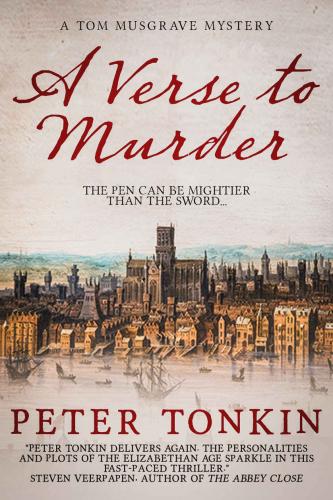 Description:
"Peter Tonkin delivers again. The personalities and plots of the Elizabethan age sparkle in this fast-paced thriller." Steven Veerapen, author of The Abbey Close

Poet and politician Edmund Spenser is found dead in his lodgings on King Street, London.

Musgrave begins an investigation, only to find himself fighting to untangle a web of political backstabbing, black magic, poisoning and treason.

There are initially more questions than answers, but the trail leads Musgrave to study the poet’s early work, including the notorious satire Mother Hubberd’s Tale – which even now threatens to destroy some of the most powerful men in England.

As the Earl of Essex arranges the most famously extravagant funeral of the age, only three days after the poet’s death, Musgrave races to unmask the man who has been so outraged by Spenser’s verse that he has had the poet murdered.

And he must do so, before his own name is added to the death list.

“The Ides is a testosterone-fuelled battle roar in a world of double-dealing and betrayal, where wits must be sharp and recovery time between violent encounters is brief. Peter Tonkin has infused a familiar narrative with excitement, energy and a delicious twist right at the very end.” – Mystery People

Peter Tonkin was born in 1950 in Ulster, Northern Ireland and was raised in the UK, Holland, Germany, and the Persian Gulf. The son of an RAF officer, Tonkin spent much of his youth travelling the world from one posting to another.