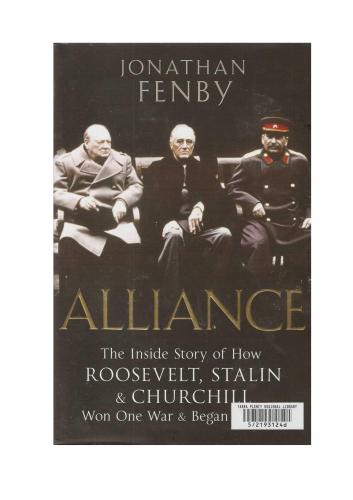 General:
Name: Alliance The Inside Story Of How Roosevelt Stalin And Churchill Won One War And Began Another
Format: pdf
Size: 17.7 MB

Book:
Title: Alliance: The Inside Story of How Roosevelt, Stalin and Churchill Won One War and Began Another
Author: Chris
Language: English
Year: 2015

Description:
The history of the Second World War is usually told through its decisive battles and campaigns. But behind the front lines, behind even the command centres of Allied generals and military planners, a different level of strategic thinking was going on. Throughout the war the ‘Big Three’ — Churchill, Roosevelt and Stalin — met in various permutations and locations to thrash out ways to defeat Nazi Germany — and, just as importantly, to decide the way Europe would look after the war. This was the political rather than military struggle: a battle of wills and diplomacy between three men with vastly differing backgrounds, characters — and agendas.

Focusing on the riveting interplay between these three extraordinary personalities, Jonathan Fenby re-creates the major Allied conferences including Casablanca, Potsdam and Yalta to show exactly who bullied whom, who was really in control, and how the key decisions were taken. With his customary flair for narrative, character and telling detail, Fenby’s account reveals what really went on in those smoke-filled rooms and shows how "jaw-jaw" as well as "war-war" led to Hitler’s defeat and the shape of the post-war world.