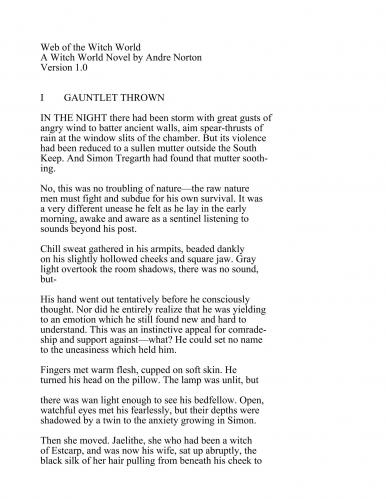 Witch World
The first book in the classic Witch World saga by beloved fantasy and science fiction author Andre Norton. Simon Tregarth, a man on the run, escapes from our world into another, where magic still has power. He finds new purpose in the service of Estcarp, whose witches use their ancient knowledge of magic to protect their home. But a new threat is rising: the mysterious Kolder, who possess powers and technology unlike anything known in the Witch World. It will take Simon and the forces of Estcarp all their might, their courage, and their magic to drive back the insurmountable enemy.

Web of the Witch World
Fantasy and science fiction Grand Master Andre Norton’s Witch World saga continues in Web of the Witch World. After repulsing the Kolder, the land of Estcarp is safe, until a sudden disappearance sends Simon Tregarth and his allies on a quest to stop an enigmatic new danger. Though the Kolder were defeated before, they rise again with a vengeance, and their plot is even more sinister than before. From Karsten in the south to the swamps of Tor to the Kolder’s impenetrable stronghold and beyond, Simon must fight to stop the invaders of his adopted home once and for all.

Year of the Unicorn
Year Of the Unicorn returns to Andre Norton’s Witch World with a tale of adventure and magic. The orphan Gillan grew up in an abbey in High Hallack, always knowing she was different and never feeling at home. When the lords of High Hallack pledge twelve brides to the Were Riders in exchange for their protection, Gillan is faced with an opportunity few would consider: to take the place of one of the twelve chosen women and go off to parts unknown to marry one of these strange wild men. But Gillan leaps at the chance to leave the only home she has ever known in the hopes of finding something she was meant to do. And her rare gift to see through illusions that fool others will prove vital in a journey where nothing is as it seems.