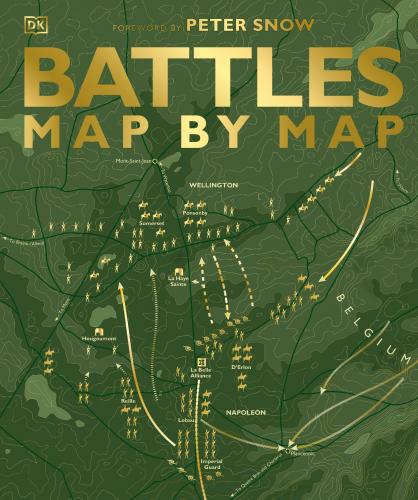 Description:
Explore the world’s most famous battles via their geography with this one-of-a-kind history title, which maps out ancient, medieval, and modern battles

If you’re a keen history nut interested in wars fought through the ages, this book is for you. Wars and engagements like the Battle of Alesia, the Napoleonic Wars, and World War II are mapped out, major battle by major battle, so that readers can follow the geography of these epic battles.

SI Battles Map by Map puts you in the seat of famous generals and commanders such as Ramess II, Napoleon, and Alexander the Great who expertly planned their attacks by studying the plains on which they would take place. Inside this book you’ll find:

– Around 80 specially made, easy-to-follow main maps clearly show the course of famous battles throughout history
– Fascinating contemporary maps that illustrate battles
– Timelines that show the chronology of events to enhance readers’ understanding
– Stunning historic images bring history to life on the page
– Easy-to-read text that explains the events of the battles
– Additional contextual information on key technologies, leaders, armies, and more

History’s most famous battles, told one by one

Broadcasting journalist and historian, Peter Snow, provides a foreword for this marvelous military book. From ancient to modern battles, he provides context for the world’s most famous wars, both won and lost. See for yourself how tactics, technology, vision, and luck have all played a part in the outcome of wars throughout history.

Bursting with lavish illustrations and full of fascinating detail, this book is the ultimate book for map lovers, military history enthusiasts, and armchair generals everywhere. SI Battles Map by Map takes you right to the heart of the action. Famous commanders and military leaders are profiled, and the impact of groundbreaking weapons and battlefield innovations is revealed.

Other titles in the Map by Map series

The Map by Map series includes other titles such as History of the World Map by Map and World War II Map by Map, each detailing historical events and placing them in the context of geography. These books include fascinating facts, high-quality photography, and detailed profiles and descriptions of people and events.