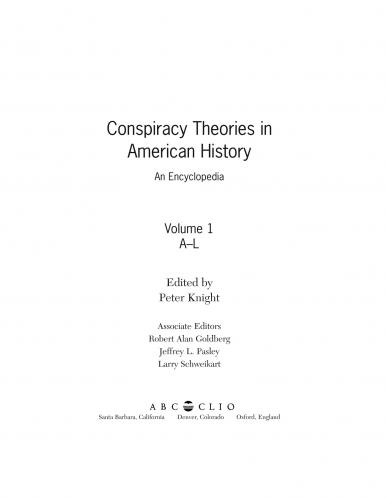 Description:
The first comprehensive history of conspiracies and conspiracy theories in the United States.
Conspiracy Theories in American History: An Encyclopedia is the first comprehensive, research-based, scholarly study of the pervasiveness of our deeply ingrained culture of conspiracy. From the Puritan witch trials to the Masons, from the Red Scare to Watergate, Whitewater, and the War on Terror, this encyclopedia covers conspiracy theories across the breadth of U.S. history, examining the individuals, organizations, and ideas behind them. Its over 300 alphabetical entries cover both the documented records of actual conspiracies and the cultural and political significance of specific conspiracy speculations.
Neither promoting nor dismissing any theory, the entries move beyond the usual biased rhetoric to provide a clear-sighted, dispassionate look at each conspiracy (real or imagined). Readers will come to understand the political and social contexts in which these theories arose, the mindsets and motivations of the people promoting them, the real impact of society’s reactions to conspiracy fears, warranted or not, and the verdict (when verifiable) that history has passed on each case.