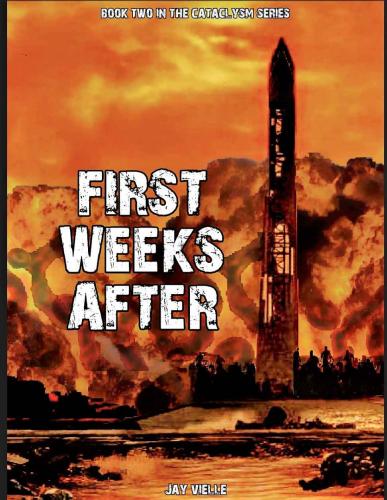 Having realized that his wife, once presumed dead, is now a mutate, Jake Fisher and his sons have to find a way to skirt past military blockades and get into Washington D.C. to rescue her. With them are fellow teacher Eddie Reyes, who is looking for his parents, and Wendy Yubashiri, the researcher trying to reunite with her colleague, Colonel Ray Cannaveral at the Pentagon. Unbeknownst to them, however, the local pastor of an extremist church has delusions of grandeur and is making his move to take over the town and mold it in his image. To do so, he’ll have to collaborate up with some very dangerous partners, who have violent ways of dealing with investigators and malcontents–including three of Jake’s friends. Meanwhile, the rest of the country is just starting to recover from the first weeks after the bombs began dropping in World War III and formulating a plan to retaliate. Book 2 in the Cataclysm Series.