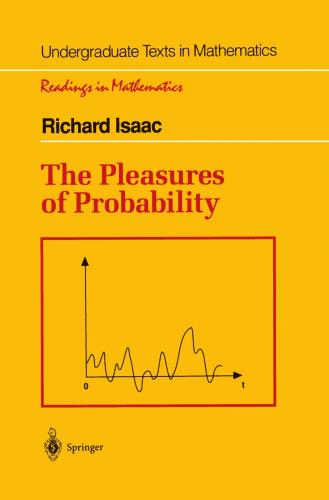 Description:
The ideas of probability are all around us. Lotteries, casino gambling, the al­ most non-stop polling which seems to mold public policy more and more­ these are a few of the areas where principles of probability impinge in a direct way on the lives and fortunes of the general public. At a more re­ moved level there is modern science which uses probability and its offshoots like statistics and the theory of random processes to build mathematical descriptions of the real world. In fact, twentieth-century physics, in embrac­ ing quantum mechanics, has a world view that is at its core probabilistic in nature, contrary to the deterministic one of classical physics. In addition to all this muscular evidence of the importance of probability ideas it should also be said that probability can be lots of fun. It is a subject where you can start thinking about amusing, interesting, and often difficult problems with very little mathematical background. In this book, I wanted to introduce a reader with at least a fairly decent mathematical background in elementary algebra to this world of probabil­ ity, to the way of thinking typical of probability, and the kinds of problems to which probability can be applied. I have used examples from a wide variety of fields to motivate the discussion of concepts.