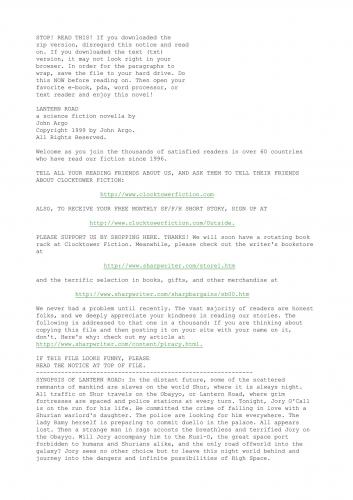 Description:
Two passionate lovers, best friends since childhood – a human slave, Jory, and his alienish mistress, the beautiful young princess Ramy of Oba – are discovered in a forbidden tryst. They face death together by classic twin short-swords, inscribed with nursery rhymes doubling as suicide poems, which are routinely gifted to lovers in this dark, faraway world run by a samurai-like warrior cult.

Praised by key reviewers, Lantern Road is a far-future adventure of doomed love between a human and a gorgeous alien princess. In a galaxy where humans are hated and hunted like prey during the Inversion of Man, their affair causes scandal that only ritual suicide can fix. While Lady Ramy is forced to take her life (but wait – you don’t know the whole story until the end), Jory the Velvet Thief & Failure escapes to the stars.

The title Lantern Road refers to the imperial highway circling Oba’s great island in eternal night. Full of foot traffic with swinging, hurrying lanterns of all colors, it evokes the galaxies above.

What will become of the doomed lovers? Will their Lantern Road be one of death, or will they find their way to the stars?

In a terrifying, achingly far-distant future lies an alien realm that resembles feudal Japan. Old Earth is long forgotten or may never have existed. Humans are the despised underpeople of the galaxy, hunted and killed like prey, hated everywhere, enslaved in a few lucky places like Oba.

Alas, Lady Ramy and her wasp-sister Ramy-baba cannot escape self-execution by the twin short rabbit-swords of the ancient poetic fame. But Jory O’Call, her human lover – condemned as well by his own people – escapes to the stars. There, he encounters wonders beyond imagination. But the greatest wonder of all is a secret we encounter at the very end of the story. It is a new life, a new Lantern Road, in which the lanterns are the ocean of stars through which Jory navigates starships – but sometimes fate comes full circle. There is even more to wonder at, but we leave that to your reading pleasure and amazement.

Tim Pratt (HUGO Award), Locus Online: "…a richly-realized far-future world in which strange wonders are revealed as considerable suspense builds. The characters are interesting, and the plot moves well, but the real star here is the universe in which the events take place, especially the inhabited moon, Shur, with its complex star faring alien culture, reminiscent of Imperial Japan, but with strange complications–including multi-use fungi gardens and a third gender. Argo’s handling of detail is remarkable, creating a sense of a whole universe without bombarding the reader with unnecessary information." (full review with the book).

John K. Muir, author/media critic, SciFi Channel, Cinescape, etc: "I had the pleasure of reading Lantern Road…and found it to be a very atmospheric reading experience. I was floored by many of the descriptive passages and conceits… John Argo’s Lantern Road is a sensuous and elaborate glimpse into a distant future–evoked…by way of our storied past. Earth is a barely-remembered legend, man is a slave, and a unique species of alien (which includes an insect-like third sex…) dominates a faraway planet. But the story is accessible and immediate (rather than farfetched) because the writer, in lyrical, descriptive passages, has forged a civilization that evokes memories of the ancient Orient, with all of its imperial plotting and conspiracies. Our hero, Jory O’Call, is a slave, sold into a royal alien family by his poor parents…" (full review with the book).(other reviews)

Lantern Road is a novella in the Empire of Time series by John Argo. The series, multiple stories & novels to date, spans eons; divided into major Sectors: Down Time, Holo Time (the epoch in which we live today), Mid Time (3000-5000), and Up Time (after 5000 CE). The Inversion of Man is an age of horror (15-17k HC) after the fall of Mercury City in 15 HC. For Holocene Calendar, CE+10k.