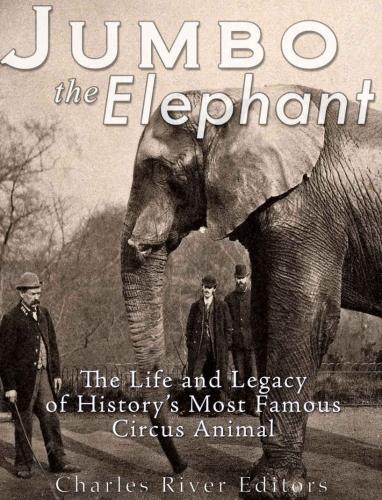 “I had often looked wistfully on Jumbo, but with no hope of ever getting possession of him, as I knew him to be a great favorite of Queen Victoria, whose children and grandchildren are among the tens of thousands of British juveniles whom Jumbo had carried on his back. I did not suppose he would ever be sold.” – P.T. Barnum

Modern views of animals range from hunters who pay big money to go on safaris in Africa to vegans who refuse to use even the wool or milk from a fellow creature, and as is the case with most controversies, most people fall in the middle, not wanting to kick a dog but still enjoying a good steak. However, in the early 20th century, the standards were much different, with animals seen as strictly property to be gathered and used with little to no consideration about their health or feelings.

It was into this world that a little elephant later called Jumbo was born. He quickly learned the harsh realities of life when his mother was killed by hunters before his first birthday. Then he himself was taken from his sunny home and transported thousands of miles to soggy London, where he was expected to spend his days on display or earning his very limited keep by carrying small children for rides on his back. While he was fed hay, dry grass that was at least some substitute for the fresh greenery of the African plains, he was also fed both beer and hard liquor, oysters, cakes and candy, a diet that would have severely shortened his life had not a terrible accident ended it first.

During this time his one faithful friend, a man named Matthew Scott, tried to do the best he could to care for the animal and even meet his emotional needs. However, even Scott was hampered by the times in which he lived, especially when the command came to walk an 11 foot tall Jumbo into a crate barely big enough to hold him and to travel with him in these cramped quarters for a two week trip across another ocean to yet another unfamiliar land.

Ironically, it was that same trip that made Jumbo an international celebrity. Americans had loved traveling circuses for generations, and none represent the country’s love for entertainment quite like the most famous of them all: the Ringling Bros. and Barnum & Bailey Circus. Circus promoters have long been viewed as somewhat shady hucksters, but none could top P.T. Barnum, who used a blend of traditional circus entertainment, freak show exhibits, and outright hoaxes to create “The Greatest Show on Earth”. In fact, Barnum had specialized in circus entertainment decades before traveling circuses were truly a national sensation, particularly thanks to the popularity of the Barnum American Museum in New York City. Barnum’s museum offered something for everyone across its different halls, from poetic readings to animal exhibits, and all the while, Barnum was defiant when confronted by criticism, reminding people, "I am a showman by profession…and all the gilding shall make nothing else of me."

Jumbo was not a pet to P.T. Barnum but an investment, an attraction that soon paid off in a big way. But Jumbo was also beginning to suffer the effects of his poor lifestyle even as fate led him toward his death on a crowded railroad track. It’s a story that saddens many today, but in the 1880s, it was more or less the way things were. Nonetheless, the influence Jumbo had was fitting given his size, leading not only to similar acts across various traveling circuses but also to adaptations of his story, perhaps most notably Disney’s Dumbo in the 1940s.

Jumbo the Elephant: The Life and Legacy of History’s Most Famous Circus Animal looks at Jumbo’s history, and the giant impact the elephant had on entertainment.