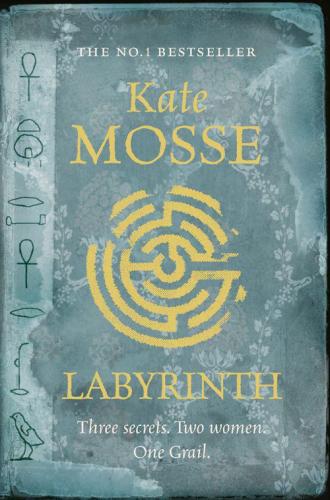 Description:
July 2005. In the Pyrenees mountains near Carcassonne, Alice, a volunteer at an archaeological dig, stumbles into a cave and makes a startling discovery-two crumbling skeletons, strange writings on the walls, and the pattern of a labyrinth.

Eight hundred years earlier, on the eve of a brutal crusade that will rip apart southern France, a young woman named Alais is given a ring and a mysterious book for safekeeping by her father. The book, he says, contains the secret of the true Grail, and the ring, inscribed with a labyrinth, will identify a guardian of the Grail. Now, as crusading armies gather outside the city walls of Carcassonne, it will take a tremendous sacrifice to keep the secret of the labyrinth safe.

From Publishers Weekly
Mosse’s page-turner takes readers on another quest for the Holy Grail, this time with two closely linked female protagonists born 800 years apart. In 2005, Alice Tanner stumbles into a hidden cave while on an archeological dig in southwest France. Her discovery-two skeletons and a labyrinth pattern engraved on the wall and on a ring-triggers visions of the past and propels her into a dangerous race against those who want the mystery of the cave for themselves. Alaïs, in the year 1209, is a plucky 17-year-old living in the French city of Carcassone, an outpost of the tolerant Cathar Christian sect that has been declared heretical by the Catholic Church. As Carcassonne comes under siege by the Crusaders, Alaïs’s father, Bertrand Pelletier,entrusts her with a book that is part of a sacred trilogy connected to the Holy Grail. Guardians of the trilogy are operating against evil forces-including Alaïs’s sister, Oriane, a traitorous, sexed-up villainess who wants the books for her own purposes. Sitting securely in the historical religious quest genre, Mosse’s fluently written third novel (after Crucifix Lane) may tantalize (if not satisfy) the legions of Da VinciCode devotees with its promise of revelation about Christianity’s truths. 8-city author tour. (Mar.)
Copyright © Reed Business Information, a division of Reed Elsevier Inc. All rights reserved.

From Booklist
Mosse’s epic adventure weaves together the present and the past in an entertaining Grail-quest tale. In the present, Alice Tanner, a volunteer at a French archaeological excavation, stumbles across the skeletal remains of two people in a cave, as well as a ring with an intricate labyrinth engraved on it. Her discovery attracts the attention of two unsavory figures: Paul Authie, a sinister police inspector, and Marie-Ceile de l’Oradore, a wealthy, powerful woman. When the ring that Alice discovered and the friend that invited her out on the dig both disappear, Alice begins to fear for her safety. Interlinked with Alice’s story is that of 17-year-old Alais, newly married to a handsome chevalier and living in thirteenth-century Carcassonne. The threat of French invasion grows every day, but Alais and her father are more concerned with protecting three sacred books that reveal the secret of the Grail. The Crusaders want the books, but two people much closer to home are working against Alais and her father, desirous of the promise of eternal life that the Grail offers. Although the novel contains lulls in places, the medieval story is exciting. Expect demand. Kristine Huntley
Copyright © American Library Association. All rights reserved