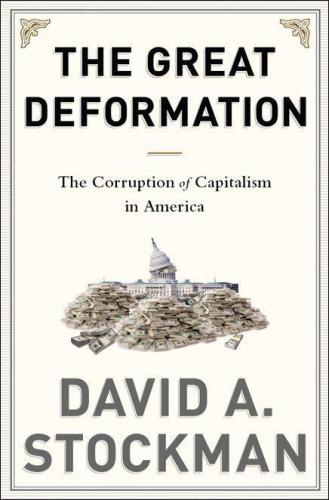 General:
Name: The Great Deformation The Corruption Of Capitalism In America By David A Stockman
Format: epub
Size: 878.72 KB

The Great Deformation is a searing look at Washington’s craven response to the recent myriad of financial crises and fiscal cliffs. It counters conventional wisdom with an eighty-year revisionist history of how the American state-especially the Federal Reserve-has fallen prey to the politics of crony capitalism and the ideologies of fiscal stimulus, monetary central planning, and financial bailouts. These forces have left the public sector teetering on the edge of political dysfunction and fiscal collapse and have caused America’s private enterprise foundation to morph into a speculative casino that swindles the masses and enriches the few.

Stockman’s analysis skewers Keynesian spenders and GOP tax-cutters alike, showing how they converged to bloat the welfare state, perpetuate the military-industrial complex, and deplete the revenue base-even as the Fed’s massive money printing allowed politicians to enjoy “deficits without tears.” But these policies have also fueled new financial bubbles and favored Wall Street with cheap money and rigged stock and bond markets, while crushing Main Street savers and punishing family budgets with soaring food and energy costs. The Great Deformation explains how we got here and why these warped, crony capitalist policies are an epochal threat to free market prosperity and American political democracy.

Review
Kirkus Reviews
“Stockman performs a real service when he debunks the myths that have been associated with Reagan’s conservatism and promotes Eisenhower’s fiscal and military conservatism.. Stockman forcefully conveys enormous amounts of knowledge.”

LewRockwell.com
“In The Great Deformation, David Stockman – former US congressman and budget director under Ronald Reagan – tells the story of the recent crisis, and takes direct aim at the conventional wisdom that credits government policy and Ben Bernanke with rescuing Americans from another Great Depression. In this he has made a seminal contribution. But he does much more than this. He offers a sweeping, revisionist account of US economic history from the New Deal to the present. He refutes widely held myths about the Reagan years and the demise of the Soviet Union. He covers the growth and expansion of the warfare state. He shows precisely how the Fed enriches the powerful and shelters them from free markets. He demonstrates the flimsiness of the present so-called recovery. Above all, he shows that attempts to blame our economic problems on "capitalism" are preposterous, and reveal a complete lack of understanding of how the economy has been deformed over the past several decades.Thanks to The Great Deformation, not a shred of the regime’s propaganda is left standing. This is truly the book we have been waiting for, and we owe David Stockman a great debt.”

Booklist
“This thought-provoking book will contribute to important debates on these issues.”

Washington Post
“Stockman produces a persuasive and deeply relevant indictment of a system dangerously akilter.. What Stockman has written is a book that makes clear we are that future generation of the past, inheritors of all the wishful thinking, simple illogic and flawed compromises that produced the near-term benefits our parents and grandparents worried about but ultimately wanted. And now it’s payback time.”

Steve Weinberg, USA Today
“Stockman devotes some of the book to the past five years, joining multiple previous authors who have presented their nominations for the villains and heroes of the 2008 economic collapse. As a book critic and investigative reporter, I have absorbed a dozen of those previous books. Stockman’s is my favorite because of his original research, the context he presents (starting with the economic depression of the 1930s), his former insider status, and his apparent political non-partisanship during the endeavor.”
David Weigel, Slate*
“I’d read this book 10 times before I read another possible presidential candidate’s memoir of how his Real American Story schooled him in the Audacity of Hope. .a coherent vision of a World Without the Fed.”
Paul B. Farrell, Marketwatch*
“His rhetoric in a recent New York Times op-ed piece ignites like Seal Team Six coming at you, flash grenades exploding, assault weapons blazing. No wonder he triggers wild angry, hatred and revenge. Yes, he’s a truth-teller. And truth hurts, flushing out his enemies. Why? They’re sucking trillions from Americans. So you hate him. Counterattack. Big mistake. Don’t dismiss David Stockman. He’s no Kim Jong-Un blow-hard.”
Bruce Krasting*
“This is a history book. It’s a detailed account of the key events since the Depression that have shaped modern finance. I love history, and I’m familiar with those events. Stockman’s spin on financial history makes for a very good read. There’s something for everyone.”

Reuters Breakingviews
“For anyone whose economics are Austrian, and who agrees with Stockman that crony capitalism and corruption have led both fiscal and monetary policies into a cycle of ever-increasing stimulus and ziggurats of debt, ‘The Great Deformation’ is gloomily persuasive – and bodes ill for the future.”

About the Author
DAVID STOCKMAN was elected as a Michigan congressman in 1976 and joined the Reagan White House in 1981. Serving as budget director, he was one of the key architects of the Reagan Revolution plan to reduce taxes, cut spending, and shrink the role of government. He joined Salomon Brothers in 1985 and later became one of the early partners of the Blackstone Group. During nearly two decades at Blackstone and at a firm he founded, Heartland Industrial Partners, Stockman was a private equity investor. Born in Fort Hood, Texas, he attended Michigan State University and Harvard Divinity School and then went to Washington as a congressional aide in 1970.