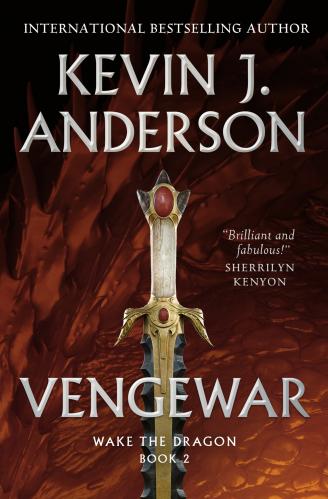 Description:
Kevin J. Anderson’s sequel to Spine of The Dragon brings bitter rivalry and blood feud-that might be the downfall of the human kingdoms.
Two continents at war, the Three Kingdoms and Ishara, have been in conflict for a thousand years. But when an outside threat arises-the reawakening of a powerful ancient race that wants to remake the world-the two warring nations must somehow set aside generations of hatred to form an alliance against a far more deadly enemy. Book One awakened the great dragon, and set the kingdoms at each other’s throats.
In Book Two, Vengewar, the Three Kingdoms are shattering under pressure from an inexperienced new King who is being led by an ambitious regent to ignore the threat of the Wreths, in favor of a Vengewar with Ishara. His brother and uncle can see only the danger of the Older Race.
In Ishara, the queen lies in a coma, while an ambitious priest seizes power. But he has neither the training nor the talent to rule a nation- or even a city. Ishara is in deadly peril, and the Wreths have not even appeared on their continent.
At the Publisher’s request, this title is being sold without Digital Rights Management Software (DRM) applied.